A Fond Farewell TO Tiger Roll

A really top class day of racing today with the highlight (or maybe the low-light for those who backed the Tiger) was the hugely exciting tussle between Delta Work and the Tiger Roll who was having his last race before hanging up his hooves! Racing really doesn’t get much better than that and it was even more rewarding that thanks to Jamie, we had another winner in the bag. 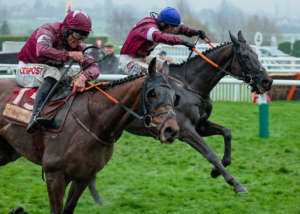 2:10 Cheltenham, Alaphilippe – 1pt e/w @7 (7 places)
Ran well here in the Albert Bartlett last year finishing a never-nearer 5th behind two rivals ‘Stattler’ 1st and ‘Vanillier’ who fought out the N/H Challenge Cup here yesterday, on what was ground that might not have been soft enough. His return run at Warwick was encouraging despite finishing 5th of 7 as he travelled so well into the race before tiring late on and looking in need of the run. He finished behind ‘Sire Du Berlais’ that day when weakening quickly whom he meets in tomorrow’s race, but he travelled so well that day and looked like he could come on tonnes for the run, so despite SDB being 7lb better off including his jockey’s claim, I just think Alaphillippe has much more potential improvement in him and he’s the one I’d like to be on to stop SDB winning this race for a record equalling third time. The softer ground will also be much more in his favour tomorrow and in a race where his trainer had a 2nd in 2018 and the 8th last year, he’ll be determined to have this fella primed to run a big race.

2:10 Cheltenham, Dunboyne – 1pt e/w @8 (7 places)
Gordon Elliott trained who’s again having a fantastic festival, he first caught my eye at Leopardstown on his penultimate start where he finished 5th in what was a good quality qualifier for tomorrow’s race. Held up behind the leaders and going well before stumbling two out and then getting hampered by a loose horse. But he kept on despite that and I thought he looked a future staying in the making. He perhaps disappointed on his next run but, after making a hash of the second last and then getting hampered soon after, his jockey was quick to throw in the towel to save him for this race. He’s far from the finished article but has tonnes of ability and with the ground turning soft/softer today, I think it strengthens his chances considerably, and off such a light weight and under Jack Kennedy who rode Delta Work to victory for us today he looks to have solid claims.

2:50 Cheltenham, Saint Calvados – 0.5pts e/w @26 generally
‘Alloha’ should be very hard to beat in this race but at around 4/6 he’s far too short for my liking. So one at a much bigger price is Saint Calvados who loves it round here and will appreciate the softening ground. We’ve not seen a great deal of him the last two seasons but he ran well for a long way in the 2021 King George and although pulling up when last seen, he was reported to have burst a blood vessel that day so that race can be forgiven. Paul Nicholls will have no doubt got him trained to the minute for this race and if getting a trouble-free race then he could sneak into a place.

4:50 Cheltenham, Dinoblue – 2pts win @3.35 generally
Probably my bet of the meeting and although she’s already seen plenty of money, I still think that there’s a tiny bit of value left in her price. There’s not a lot to say about this filly as she’s only raced once, but the style of her win and the ridiculous time she recorded when doing so, rates her as a potentially top-class hurdler. She was very well backed for that Clonmel maiden and the way she obliterated her rivals from just a little encouragement from the saddle suggested to me that, if she can do that at Cheltenham tomorrow, then she will be very hard to beat.

5:30 Cheltenham, Mr Fogpatches – 1pt e/w @9 generally (6 places)
‘Mister Fogpatches’ is a model of consistency who hardly ever runs a bad race, and he seems to be getter better with the better-quality races that he runs in. He ran a huge race I thought at Gowran Park last time which was his biggest test to date, finishing a never-nearer 3rd and looking like a bigger test was required. He should get that bigger test tomorrow and so long as he keeps the iffy jumping to a minimum then he should at least be able to run into a place, if not go on to win.

2.10 Cheltenham – THIRD WIND (22/1) – Bet365 – 0.5pt ew (7 places) – He looks an interesting runner in this Pertemps at a nice price. He was fourth in the race back in 2020 off this mark of 141, and his recent third at Warwick was eye-catching, when staying-on late to make up plenty of ground to finish ahead of two who re-oppose here, Alaphilippe and Sire Du Berlais. That run came off a 5lb higher mark, the reason for this being because he ran well below form the last day when beaten 42-lengths in third behind Wholestone at Haydock in a Grade 2 hurdle. I’m happy to forgive that, and with him back in a handicap off this mark I think he could outrun his current odds. His form on soft/heavy ground reads 3-1-2-4-1-1-1-3-5-1, and one of those came back in February 2021, when just getting the better of Lisnagar Oscar by just under a length. Prior to that he was fifth to Paisley Park in the Grade 1 Long Walk Hurdle, and a repeat of either of those efforts would surely see him run a good race here with conditions to suit, off a weight of 10-11.

3.30 Cheltenham – ROYAL KAHALA (6/1) Paddy Power – 1pt win – I tipped this horse in last year’s Mares’ Novices’ Hurdle, when not running to her true potential. She’s improved her form immensely this season, beaten half-a-length by Dysart Dynamo on seasonal reappearance, before winning twice in Grade 3 & 2 company. The first of those came over 2m4f, getting the better of previous festival winner Heaven Help Us, before scoring when upped to the extended 3m for the first time, when beating Klassical Dream (who went off 1/3 fav & finished fourth) by eleven-and-a-half-lengths. She has untapped potential over this longer trip, and at the age of seven-years-old she has plenty of room for improvement. She’ll be okay on the softer ground and she receives a 7lb mares allowance, which could hopefully benefit her immensely. If she runs to an improved rating then I’d be hopeful she’ll go close.

5.30 Cheltenham – AIN’T THAT A SHAME (17/2) – Unibet – 0.5pt ew (6 places) – Very lightly-raced eight-year-old who has shown some good form this season behind some very smart horses. He was third behind Tuesday’s NH Chase winner Stattler, back in December, before improving on that effort when second to the very exciting Galopin Des Champs just after Christmas (both over 2m5f). He was beaten just a neck the last day when upped to 3m for the first time over fences (had previously won over the extended 2m7f last season over hurdles), that being his best effort to date, and any improvement now handicapping, which is likely, could see this eight-year-old go very close in this for the Henry de Bromhead team (despite the yard not being in the best of form recently). He’ll like the softer ground here, which he’ll need to after all the rain the course had on Wednesday, and hopefully he’ll reward each-way backers, or better still get his head in front first.

This tipster below has been smashing the bookies all year –  to the tune of £241.00 Profit Per Month with a very impressive ROI of just under 15%! 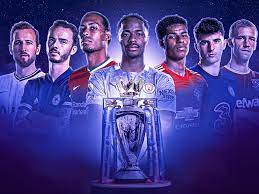