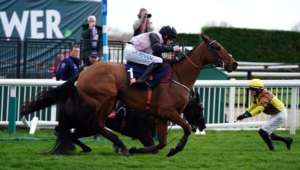 Again we had plenty to shout about today as Jamie landed 25/1 winner ‘Third Wind’ who of course beat my fancy ‘Alaphilippe’ into 2nd!
It’s the 4th and final day of Cheltenham Festival 2022 tomorrow and hopefully another day of profit.

Jamie’s picks will be added in the morning.

Has run some big races in Ireland behind smart performers including the likes of ‘Jonbon’ on his penultimate start and then ‘Sir Gerhard’ and ‘Three Stripe Life’ last time which looks top quality form, and with those two rivals franking the form by again finishing 1st and 2nd in yesterday’ s Grade 1 Ballymore Hurdle, it bodes well for the chances of CM in tomorrow’s County Hurdle which is of course a handicap.

The tacky ground shouldn’t be a problem and of this fella gets a clear round jumping wise, then I think he and his small yard have every chance of upsetting the big guns.

‘Genko’ the Gordon Elliott trained fav looks too short to me at around 3/1 as although winning a grade 1 last time, that was over 2m 4f and he’s not really proven himself as a stayer yet despite winning a 3m PTP on his first visit to a racecourse. Bardenstown Lad however looks like he’ll stay all day and won in good style on his return from a 106 day break last time, and although he’ll need to step it up to win this grade 1, he’s beaten just about everything that’s been put in front of him so far and looks to be still be improving.

The ground is a slight concern as he’s never raced on this type of ground at this kind of level, but whatever the level he won’t go down without a fight and with 6 places on offer I think he’s a bit of value.

Hasn’t been seen since finishing seventh in this race two years ago, but he’s a horse that’s clearly had training issues and being trained by Willie Mullins and returning from two years out to racing in this race again after being unlucky not to finish closer the last time, suggests to me that connections will have had this race in mind for some time, and if that’s the case, then expect to see a big run.

Has been competing in grade 1 novice races the last twice including when third to the impressive ‘Ginto’ at Naas and then third again last time to ‘Minella Cocooner’ who’s one of the fancied runners for the grade 1 Albert Bartlett tomorrow. He gets in this class 2 handicap off a mark of just 143 and looks the strongest of the sextet of Gordon Elliott runners.

1.30 Cheltenham – PIED PIPER (10/3) – Betfred – 1pt win – Vauban is a short-ish priced favourite for this final day opener, but Gordon Elliott’s gelding beat that rival two runs back on heavy ground by half-a-length in a Punchestown maiden, and I think he could confirm that form here.

The last day he won in very impressive fashion over this C&D, where Davy Russell didn’t have to move a muscle, winning hard-held by nine-lengths. That course form gives this four-year-old a really good chance of landing this, he’ll enjoy the ground conditions, especially if it’s cut up after Thursday’s racing, and if he can improve further then he’s surely going very close here. I also like the chances of Il Etait Temps on his second start over hurdles and for the Mullins yard, and could be an each-way bet.

2.10 Cheltenham – I LIKE TO MOVE IT (12/1) – Bet365 – 0.5pt ew (7 places) – This five-year-old has had a great season so far, and I’m hoping he’s not done yet. He won at Worcester back in October, before scoring twice at this course (extended 2m on the old course) to land an early season hat-trick. He beat the re-opposing Tritonic by just over three-lengths, before beating subsequent winner Washington next time out. Jonbon was too classy for him, when finishing last of five in a Grade 2 at Ascot, but he returned to form after a short break when beaten only a short-head in the Betfair Hurdle at Newbury last month.

He’s up 4lb since then, and he was entered to run in the Supreme Novices’ Hurdle on Tuesday, but connections have decided to swerve that and take a punt on this competitive handicap. They clearly feel he’s still on a good handicap mark, and with course form in the bag I can see him going well at a nice price with the drying ground in his favour, I’d like to think he’ll be in the places if improving further.

3.30 Cheltenham – GALVIN (10/3) – Bet365 – 1pt win – Last year’s Gold Cup saw Minella Indo out-stay A Plus Tard up the famous hill, with dual-race winner Al Boum Photo back in third, and all three of those horses are likely to line-up again in the 2022 renewal. It’s hard to fancy Henry De Bromhead’s nine-year-old to follow up last year’s success after being pulled-up in the King George, but three-miles on a flat track wouldn’t have suited and this test of stamina is more to his liking.

Al Boum Photo has used his usual stepping stone for this race with a fourth successive victory in a Grade 3 at Tramore, but now at the age of ten-years-old, may find it tough against younger legs, whilst King George winner Tornado Flyer will need to prove that he can handle this type of stamina test. A Plus Tard laughed at his rivals in the Betfair Chase at Haydock, winning at a canter by 22-lengths and he was agonisingly denied a fourth Grade 1 when collared on the line in the Savills Chase at Leopardstown. The winner of that race was Gordon Elliott’s improving stayer GALVIN, and it’s this eight-year-old who I’m pinning my colours to.

He brings both course & festival form to the table having won last season’s National Hunt Chase over 3m6f, as well as finishing a close second the previous year in the 2m4f ‘Northern Trust Company Novices’ Chase’, showing that he has both stamina and speed to be competitive in a race like this. Since that second-placed finish at the 2019 festival he’s shown outrageous consistency with form figures of 1-1-1-1-1-1-2-1, four of those coming in graded company. He has won on varying ground, with victories on both good and soft, and despite not being on many people’s radar at the beginning of the season, he’s certainly caught my eye and has put himself firmly in the frame to give his trainer a second win in this prestigious race.

Click The Box Below To Get  Daily Free Tips!