Cheltenham staged it’s last successive days meeting before the festival over the weekend, with just the New Year’s Day and Trial’s day meetings left to host before March’s big event. I was in attendance on both days and have put together five horses to follow out of the meeting going forward, horses which didn’t win their respective races but showed that their turn may not be too far away. 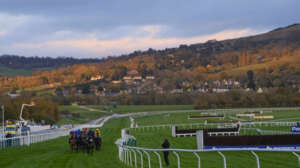 The first horse I have picked out is WASHINGTON who ran third in the 2m1f Novice Hurdle on Friday where he was beaten just under two-lengths. I thought the longer straight on the new course would help him to get his head in front, after a staying-on second a month prior in the Supreme Trial on the old course, but having got into a challenging position after being ridden cold out the back he just couldn’t quite wear down the front two, who at the line went away again from the five-year-old.

He had won his first three career starts, until coming up short at Prestbury Park the last twice, but for me he will come into his own when stepped up in trip being a son of Westerner with his Dam’s sire being Presenting, there’s plenty of stamina in his pedigree. I thought he was quite keen throughout Friday’s contest which might have been due to the small-field, so possibly a bigger field may help with this, but with more racing experience I can see him winning plenty of races and quite soon with a step-up in trip.

Venetia Williams has been having a good season so far and I liked the way FRERO BANBOU ran behind an improver in Editeur DuGite, who made it a course-double, having won there the previous month. Venetia’s six-year-old was beaten just under seven-lengths in third behind two horses, both rated over a stone higher than him. However, he wasn’t finishing a tired horse, having jumped the last well. I was impressed the last day at Newbury with how well he stuck to his task, to again finish a fair third and both runs came over the extended 2m on good-to-soft ground.

Now we all know Venetia’s horses come into their own when the ground is on the soft side, and maybe we will see that with this gelding over the winter moths to come, or even stepping up slightly in trip on better ground, might also give him a chance to return to the winners enclosure, as his current rating of 134 is well within his grasp.

For me, there were two to take out of the Racing Post Gold Cup, one of which I have been keeping an eye on for a while now, as I think surely his chance of getting his head back in front can’t be far away – and that’s the Phillip Hobbs-trained ZANZA. This seven-year-old was staying-on well through the line and managed to grab second place from last month’s Paddy Power Gold Cup winner Midnight Shadow.

He was sixth in that race four weeks prior, and the assessor has only raised him a pound from the weekend, which puts him on a mark of 145. This is the same mark as he was previously on when travelling powerfully at this course, before falling in a race twelve months ago. He’s certainly handicapped to win a race of a similar nature, but in my opinion it may come in a truly ran race over the minimum two-mile trip, instead of that over middle distances (which he is still capable of).

The Johnny Henderson at the festival may well be his target again, as he was very unlucky last year when pulling up and having been very badly hampered by a faller in front. I’d be hoping he remains on a similar mark to this come March as he will be on my radar. 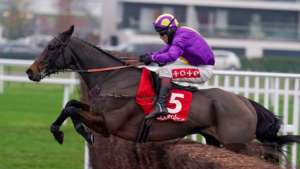 The other horse was the fourth-placed FUSIL RAFFLES who came in for support in the build-up to the off. He made a shuddering error at the tenth fence, which halted his progress, but he did recover to finish a respectable fourth, though mistakes like that in big-field races are very costly, as he found out – without that I feel he would’ve finished a lot closer.

He has a good record at Cheltenham as well with two previous successes and a couple of placed efforts, which bodes well for the festival in March. His mark has dropped a pound to 151, and with him so versatile distance wise, with wins over 2m/2m4f/3m, connections have plenty of options, though in my opinion, a strongly run middle distance race would suit him best – the Paddy Power Plate probably is the more realistic target.

The last race of the meeting produced a thrilling finish with three horses together at the line, and it’s the horse who was placed second INDEFATIGABLE, who I think can still make an impact off these sorts of marks. She was beaten a neck in this race, carrying top-weight of 11st12lbs, having rallied well towards the line, but possibly the 5lb she was conceding was her undoing this time around.

Then she won a Grade 2 on her penultimate start up at Wetherby, when beating some very good horses in the form of Paisley Park & Thomas Darby. She never travelled the next day when beaten by those in another Grade 2. Surprisingly, she has been raised only 2lbs from the weekend, which is only 2lbs above the mark in which she won the Martin Pipe Handicap Hurdle off in 2020.

At last year’s festival she was a fair fourth behind some smart horses in the Grade 1 Mares’ Hurdle. Those mentioned races are again targets for her, and I think her team will wait and see how her mark changes before then to determine which route they will take. In my opinion, softer ground would be more beneficial to her, with her best form coming on this terrain. 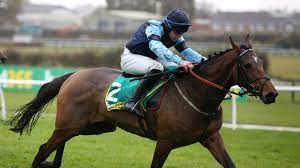