Team ThoroughBid took a narrow lead in the William Hill Racing League after the fourth week of the six-meeting series.

They had just the one winner on the card, courtesy of Quickstep Lady in race two, but picked up further crucial points in other races to end the evening on top with 245 points.

Hayley Turner steered the Andrew Balding-trained filly home to earn the 25 points and she now heads the jockeys’ table.

“It was a strong gallop and she ground it out really well,” she told Sky Sports Racing.

“She goes so well at home and looks a million dollars so it was nice it paid off today.”

Team Swish led at the start of play and added 18 points to their tally when Fernando Rah was runner-up in the opening contest.

That went to Newmarket Red’s Autumn Flight (12-1), from Robert Cowell’s yard, who prevailed by half a length in the hands of Robert Havlin.

However, Team Swish finished the night in fourth place on 231 points, with Goat Racing second on 242 and Team talkSPORT third on 232. 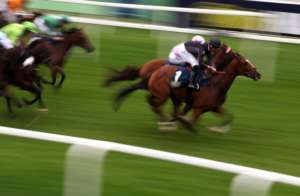 Goat Racing had their winner with Via Serendipity, who came with a strong run to win race four over a mile.

“I’ve been watching all the races and I was a bit worried as my instructions were to switch him off, but Charlie was right – he knows the horse inside out. When the gaps came he picked up like a nice horse,” said Steward.

“One smooth run down the middle here helps, especially on a hold-up horse. We did that and it paid off.”

Dark Lion (7-2) came from off the pace to snatch the spoils for Team talkSPORT in race three over a mile in the hands of Jack Mitchell.

Roger Varian’s charge was produced with a rattling run to grab Air To Air close home to score by a neck.

Champagne Piaff (2-1 favourite) was the toast of Team BullionVault when winning race five in great style.

The Gary Moore-trained three-year-old stayed on strongly under Hector Crouch to score nicely from Barenboim.

Remulate Racing had their first winner of the competition when Sword Beach (11-1) struck in race six in the hands of Georgia Dobie for trainer Eve Johnson Houghton.