BITCOIN CAN BE A SUCCESSFUL TOOL IN FOOTBALL BETTING.

Football has always been a great tie-up partner when it comes to crypto. It is evident among the top-flight leagues in Europe. The Premier League, La Liga, Bundesliga, and many more have been the pioneers of using crypto as partners and sponsors for most of their teams.

Despite the threats of the pandemic that has put the world banks with their backs to the wall, football has been able to make its return to combat the threats of possibly losing a lot of profit. Thanks to crypto, they have been able to keep the money flowing through the seamless ways of deals.

There are a lot of people whose hobby is just to bet Bitcoin on sports matches since there’s fun in earning a lot of wins with their wagers. Bitcoin is the most used cryptocurrency in sports betting, and football is one of the top sports that enjoyed its rise.

Bitcoin is entrenched all over the world, and that helped a lot in the task of putting football on its path to moving forward. We have seen innovation move on a big level with crypto helping out in football, and we can expect more changes to come if this industry grows in the sport. 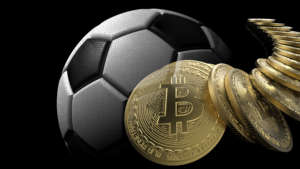 Football betting has been rampant in many leagues

Aside from the Premier League, there are many other leagues that found their way with Bitcoin. Germany adopted the use of crypto in 2020 after a long talk regarding its effects and gains. Many believed that Germany will become a crypto haven, and they are not wrong about that especially with the big Bundesliga back in business.

La Liga Santander stands as an independent league with Santander at its back. The league’s sponsor has multiple ties with crypto platforms, and they aren’t that far behind in helping the league stage its return to action.

Bitcoin’s continuous surge proves that crypto is in for a big growth this year. This will undoubtedly affect Premier League football betting in a great way. There are a lot of betting sites out there that let players bet using Bitcoin which makes sports betting even more efficient.

For one, Bitcoin is a secure currency. Unlike the popular forms of payment, crypto does not need a physical bank. This makes wagering hassle-free as you can do it in just a few clicks. Most games start in the afternoon, so there might be some delays from common banks.

Bitcoin, however, does that a lot better as it promises fast transactions. Moreover, certain sites also offer bonuses when punters use Bitcoin instead of fiat. That means that they can get a lot of winnings compared to those who use fiat.

With Bitcoin, there is a chance that punters will win twice the amount of money that they wagered. The bonuses offered for using Bitcoin instead of fiat is a great deal for most punters and this means a lot for the sites that allow Bitcoin betting.

While some say that there is going to be a tough time in moving fiat money into Bitcoin or vice versa, a lot of sites worked hard to deliver their clients the fastest and efficient way possible to do so. They may claim their prizes in the form of Bitcoin or fiat and even do direct conversions. This is why it is safe to bet Bitcoin at most, and a lot of people love to try it.

There is a strong bond between crypto and the sport itself, and you can say that the league is thriving with the use of crypto as a mode of payments or any other deals. This is why the future remains bright for crypto as a way to place wagers in sports such as football.