It was great to be back at Prestbury Park for this year’s Cheltenham festival, having missed it last year through covid, and what a scintillating four days it was, as usual (but very tiring by the end of it!). We saw some great moments across the week. Honeysuckle recorded back-to-back wins in the Unibet Champion Hurdle, stretching her unbeaten record to 15 (11 Grade One’s!). We said goodbye to a steeplechasing great, in Tiger Roll, who was unable to gain his fairytale swansong, when going down by three-quarters-of-a-length to stablemate Delta Work in the Glenfarclas Cross-Country. And, just like all previous festivals, we also got a sight of some future stars. Constitution Hill couldn’t have been more impressive in the Sky Bet Supreme Hurdle on day one, absolutely slaughtering his rivals by 22-lengths, virtually on the bridle. That came a day before Facile Vega won in impressive style in the Champion Bumper, on ground which turned remarkably to heavy, from good, in the matter of a few hours due to the deluge of rain on Wednesday (which I can assure you, was not fun to be in!). 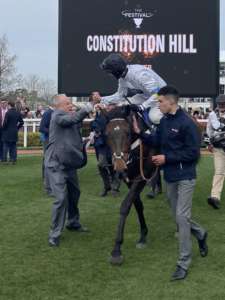 From a personal point of view, I had yet another successful festival on the tipping front, with two winners and two who returned each-way money, from twelve selections sent out to subscribers across the week. Delta Work was the first of those winners, and as already mentioned spoiled the Tiger Roll party (much to the annoyance of the majority of racegoers, who in parts actually booed a festival winner, which in my opinion was very distasteful). He was a nice price of 13/2 the previous night, as he shortened into the 5/2 favourite come flag fall. The other winner I managed to find was Third Wind, who won the Pertemps Network Handicap Hurdle. He went off at a ridiculous price of 25/1 (tipped at 22/1, with BOG the night before), having finished fourth off the same mark in the 2020 renewal. That success guaranteed me profit on the week on its own 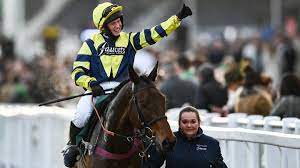 I did manage to add a couple of double-figure priced each-way returns too. Gowel Road was a never nearer seventh in the Coral Cup, at 10/1, whilst Frero Banbou, who made up a ridiculous amount of ground in the Johnny Henderson Grand Annual, finished a staying-on third at 14/1 (backed into 6/1), though on another day I think he could have won that race with a slightly more positive ride, and also if he didn’t make a bad mistake at the final fence.

The end for Tiger Roll

We had to say goodbye to one of racing’s greats as Tiger Roll ran his last race with a defeat to Delta Work in what a fantastic tussle all the way to the line. In a way I was a bit sad that we stopped the great Tiger from winning on his farewell. But with him getting beat by his stalemate at least, it was a fair ending to what had been a truly remarkable career. 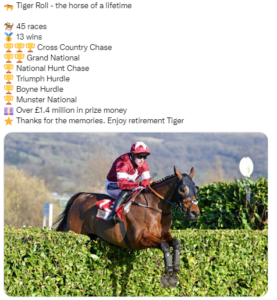 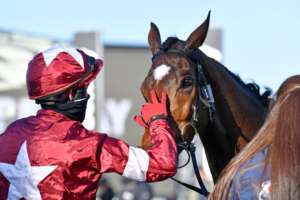 What a horse. Tiger Roll has his last race. Thanks for the memories.

Gary also enjoyed a profitable week, having tipped up three winners in total, with a further eight who returned each-way money. Brazil was the big winner of the week for him, battling very well to take the Boodles Juvenile Hurdle at 10/1, getting the better of the Willie Mullins ‘good-thing’ who was ‘chucked in’ off a mark 10lb below the one in which he should’ve been given. 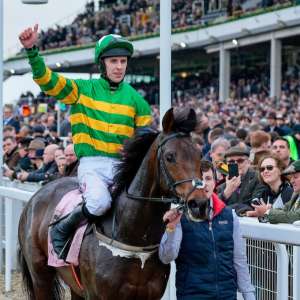 Constitution Hill, as already mentioned, kicked off the week, giving us (like many) a winning start at 5/2. Another impressive winner on the week was Gary’s third, L’Homme Presse for Venetia Williams, who also enjoyed a good week with her horses running well overall. He won the Brown Advisory Novices’ Chase, going off at 9/4 having been tipped the previous night at 4/1. Despite not having another winner on the final two days, Gary was able to rack up plenty of each-way returns which kept the weekly profit coming, and overall it was a very profitable week for our subscribers! 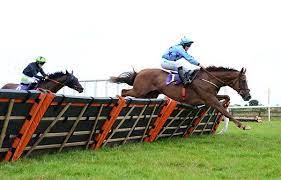 Below is a list of our winners & each-way returns between the two of us, as well as the weekly stats, with a P/L at the bottom of it. We hope you all had a great Cheltenham week, and won a few quid following us.

The flat season is just two days away and with some top class summer racing ahead we want you onboard!
The big Aintree festival is just around the corner too so don’t miss out on some top class action!

We have some cracking half-price deals below